I was recently eating lunch with someone who asked a question that I became somewhat obsessed with: what happens when you grep a file and append the contents to the same file? It’s one of these nasty cases of modifying a file that you’re reading from.

Huge thank you to Mehmet Emre & Antal Spector-Zabusky for pair programming down this rabbit hole!

To be precise, what happens when you run the following code snippet?

Okay before you run it, what are some reasonable things that could happen? And which of those do you think actually happens?

This nice photo (of the magical Zion Narrows!) is here to avoid giving it away in case you want to think about it… scroll on for some possible answers. 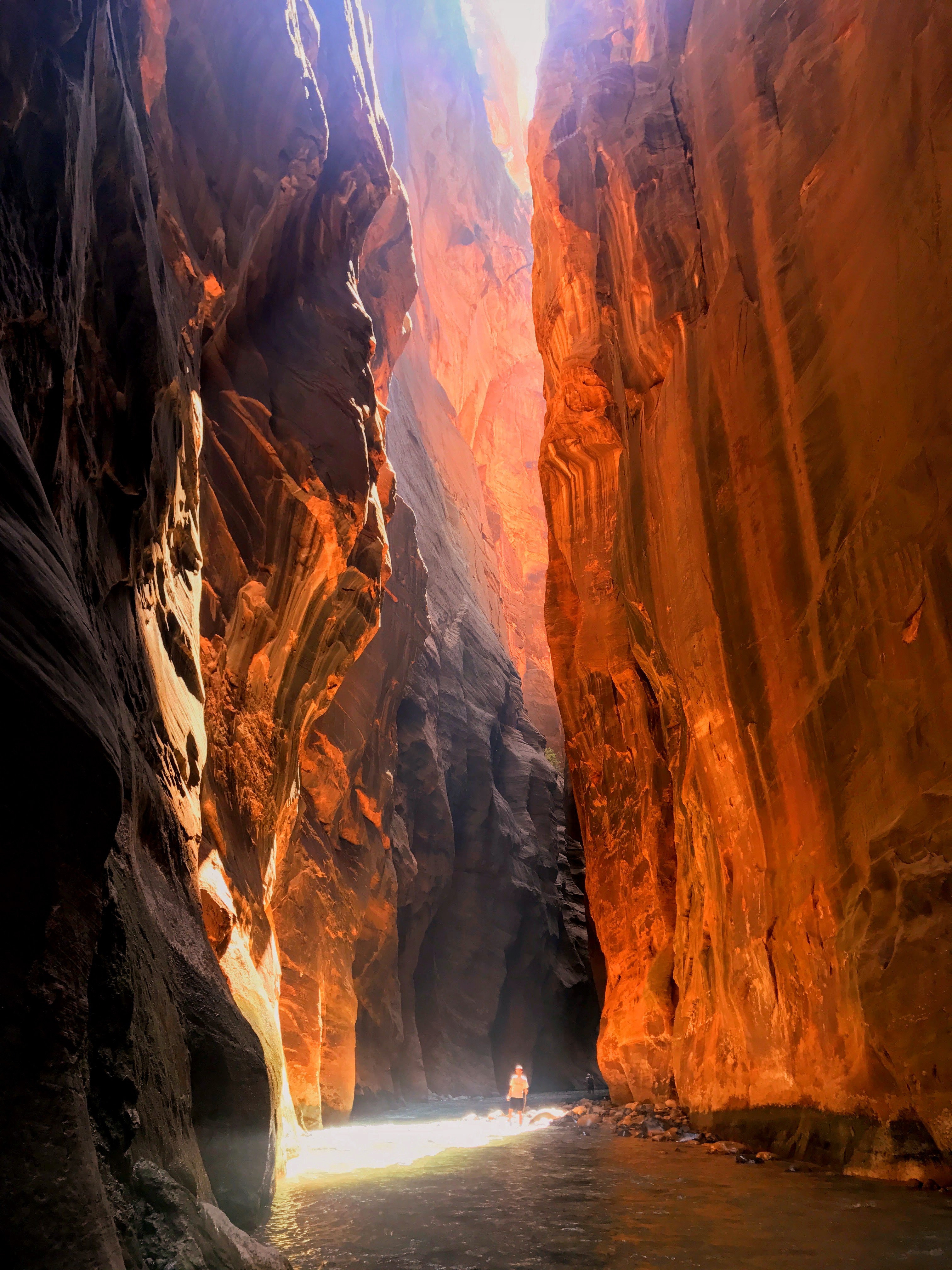 Okay, here are some reasonable things that could happen:

Okay so what actually happens?

First thing it depends upon is your OS. If you run the GNU grep (ie, on a Linux box) you get this nice error message:

I was actually not expecting any implementation to do error handling like that. That’s nice!

So it’s the case where it just terminated. Okay, well that’s boring, so let’s rinse and repeat by running the same command, and then printing out how many lines the file has:

We get stuck in an infinite loop!

How fun! We’ll look into why this is happening in a second, but first,

What happens if you try the same kind of command but with cat instead of grep?

We get stuck in an infinite loop right off the bat. Inconsistent behavior! Excellent.

Okay, let’s look into what’s actually happening. As you might guess, cat is simpler than grep, so let’s figure out what’s going on there first.

Since I’m running a mac, I’ll be referring to Apple’s recently opensourced code for cat which unfortunately doesn’t have line numbers- I’ll copy the code we care about below but if you want to follow along in the file, you can control-F for write.

So we’ve got a while-loop, where we read into a buffer. If we read any non-zero number of bytes, we go into a for-loop where we drain the buffer by doing writes. Once we’ve drained the buffer, we’ll go back up to the while loop, which will do another read into the buffer, and, if we read anything we’ll keep going.

So just to be really pedantic here, the reason cat gets stuck is that, according to the man page for write

POSIX requires that a read(2) which can be proved to occur after a write() has returned returns the new data.

Which is why we get stuck in an infinite loop off the bat.

Okay so let’s go back to grep but before we look at the source, let me point out that there’s a flag that changes the behavior:

If we run grep with the line-buffered flag then we get the same behavior as cat - it goes into an infinite loop even for very small files. So clearly the answer has something to do with buffering.

So if we check the grep source for something about line buffering, we’ll find that the --line-buffered flag calls something called setlinebuf

which sets stdout to have this behavior:

line buffered characters are saved up until a newline is output or input is read from any stream attached to a terminal device (typically stdin).

Cool. So if it spins with the --line-buffered flag, then probably what’s causing that is that the write buffer is being flushed rather than the read buffer. To verify this, let’s snoop on the read & write calls. On mac I’ll call

to start watching for read/write calls; this will give me info about any read/write calls that grep performs. On Linux you can use strace. (Sidenote: you’ll need to let dtrace through SIP to get this to work)

Okay, so after running that in one shell, I’ll pop open another shell and repeat this whole grep experiment from the beginning.

Sweet so we can see that we’ve got two read calls from grep, the first of which reads 2 bytes, the second of which reads 0 bytes. Then we’ve got a write of 2 bytes. That seems pretty consistent with the behavior we’re seeing. Running a few more rounds: 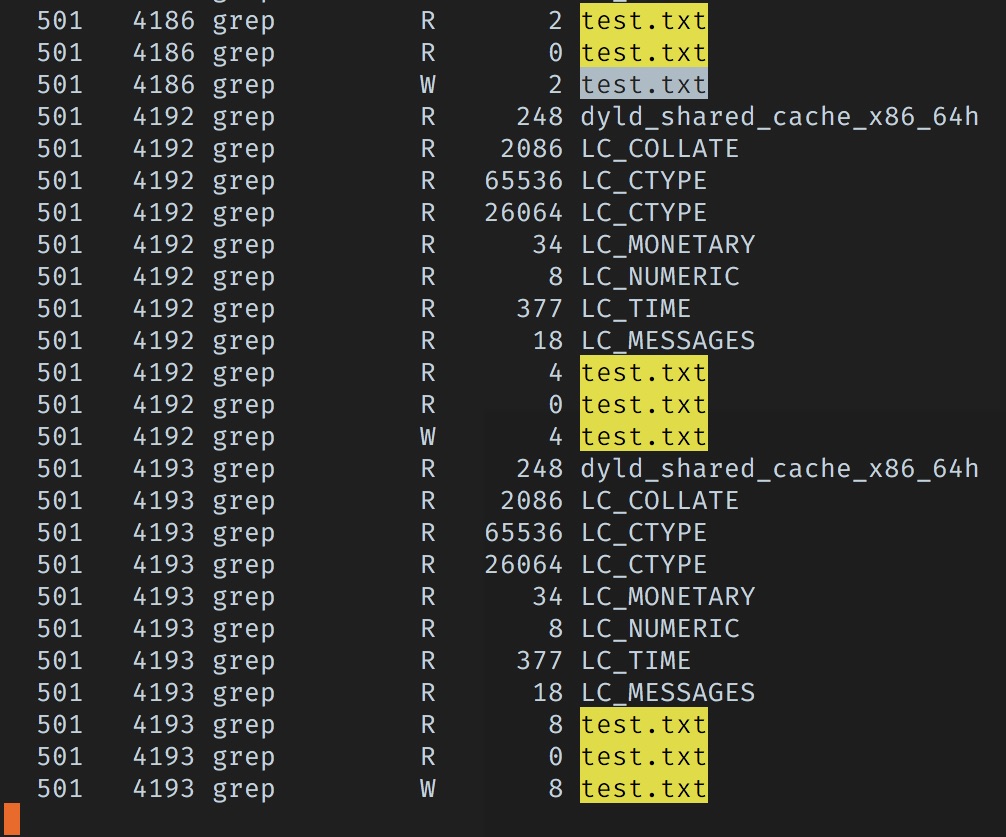 Basically the same story; we can see that now we’re reading 4 bytes, and 8 bytes- again exactly what we’d expect. Skipping forward to where we go into the infinite loop: 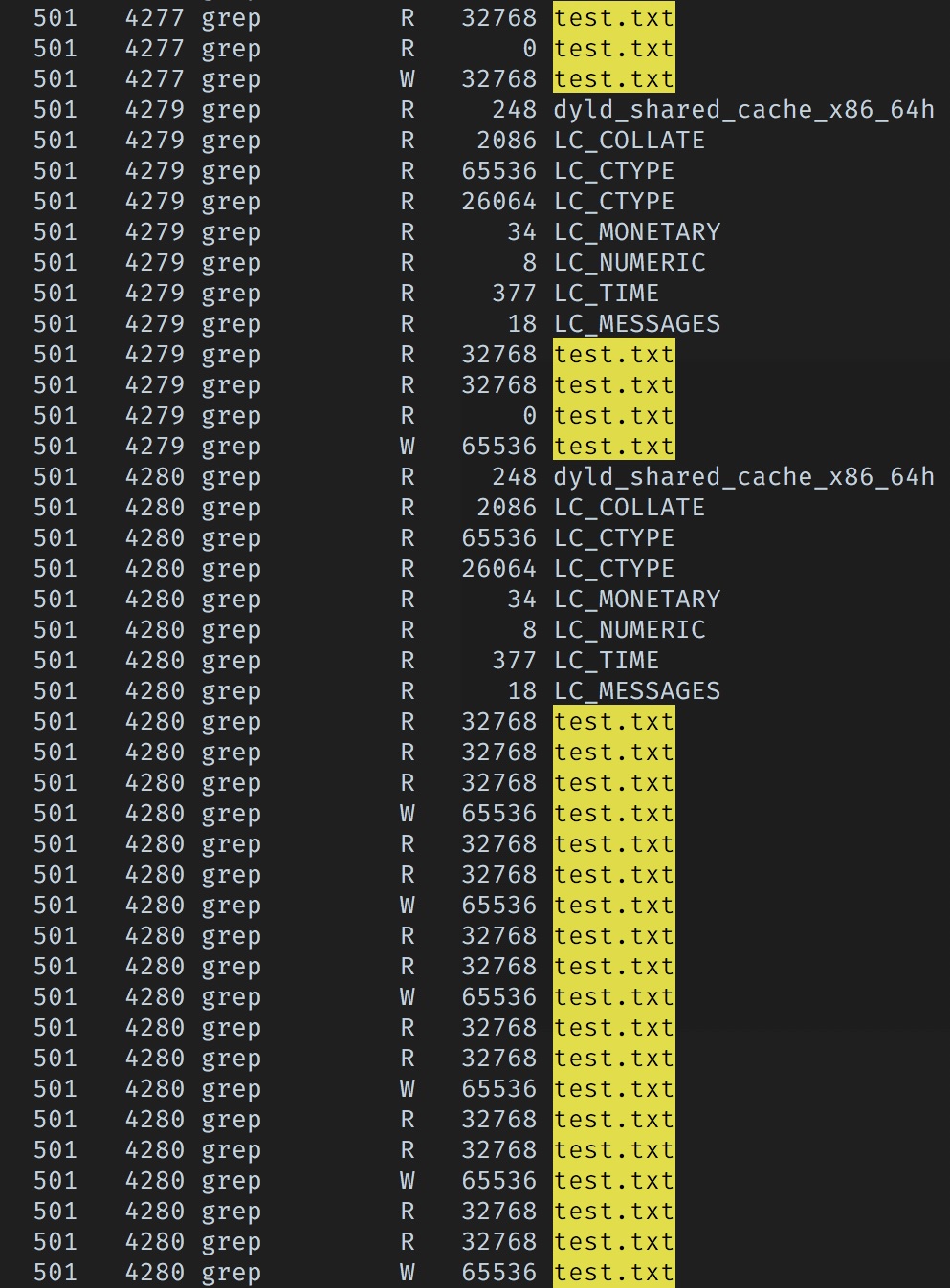 The last round before we get stuck we can see that we’re doing two reads of size 32KB before getting a read of size 0 and doing the write. This means the looping we’re seeing is definitely not caused by buffering on the read buffer!

When we do start looping, we do three reads of size 32KB and then a 64KB write; then repeat! Okay, so now all I want to know is where are these buffer sizes coming from?

First up: what’s grep doing? Well if we look at the main it just processes a ton of flags, and then (very near the bottom) calls procfile.

procfile is in util.c along with just about everything else we’re going to care about. procfile does two things we care about, first it calls grep_open (which will read the file) and then procline (which will write the results).

grep_refill does a read into a buffer:

MAXBUFSIZ is defined at the top of this file:

and is the exact size of the reads we were seeing. Hooray!

To recap, here’s the control flow:

which, if you scroll all the way down, on the penulitimate line, calls fwrite:

So where cat was doing an honest-to-god write, grep goes through fwrite. So whatever buffer size we’re using is somehow tied up in the fwrite source.

To summarize, here’s the control flow:

Figuring out where fwrite sets it’s buffer size was more challenging- props here to Mehmet for his spelunking skills. Here I’ll show you the relevant control flow up front:

I won’t walk you through all those layers of control flow but you can definitely check it out yourself if you want; starting at fwrite and ending at __swhatbuf.

Interesting Side-note! The implementation of makebuf.c in the latest apple OS (High Sierra) is rather different than in the implementation in an older version. Perhaps because Apple redid their file system for High Sierra? I know this because I went through an existential crisis (is everything I know a lie?) trying to figure out why the behavior I was seeing was inconsistent with the source code before I figured out it was the wrong version!

Okay, anyways, let’s take a look at the __swhatbuf that’s in High Sierra, because that’s what I’m running:

What I think is going on here is that we’re setting *bufsize which is being “returned” to the caller through the pointer. The first two “ifs” don’t apply to us- we’re not dealing with an empty file, and we’re not a character device. So in the final block of code, we set *bufsize to 2 different values depending on whether st.st_blksize > MAXBUFSIZE, either to

And actually, the top of the file says MAXBUFSIZE is 1 << 16 (which is 64KB) so we’re golden. For fun we can check that the st_blksize is larger than 64KB to be sure that’s the branch we’re taking. A quick c script that looks a lot like __swhatbuf will do the trick:

Compiling and running it:

Sweet, so st_blksize is 4MB which is definitely bigger than 64KB. So that’s why that’s the transition point between terminating & going into an infinite loop! 🎉

1) Weird things happen when you read from files you write to.

2) The behaviors we saw had to do with buffering of the write buffer.

3) It’s rad that you can read open-source code to figure out exactly what’s going on. Grep your way to freedom!

I was looking at both the freebsd & apple’s open source implementations of fwrite and they were almost identical… except that freebsd’s version has both an integer overflow check & a lock. It’s a little alarming that apple’s version is missing those…it’d be interesting to see if you can get some weird behavior to trigger. 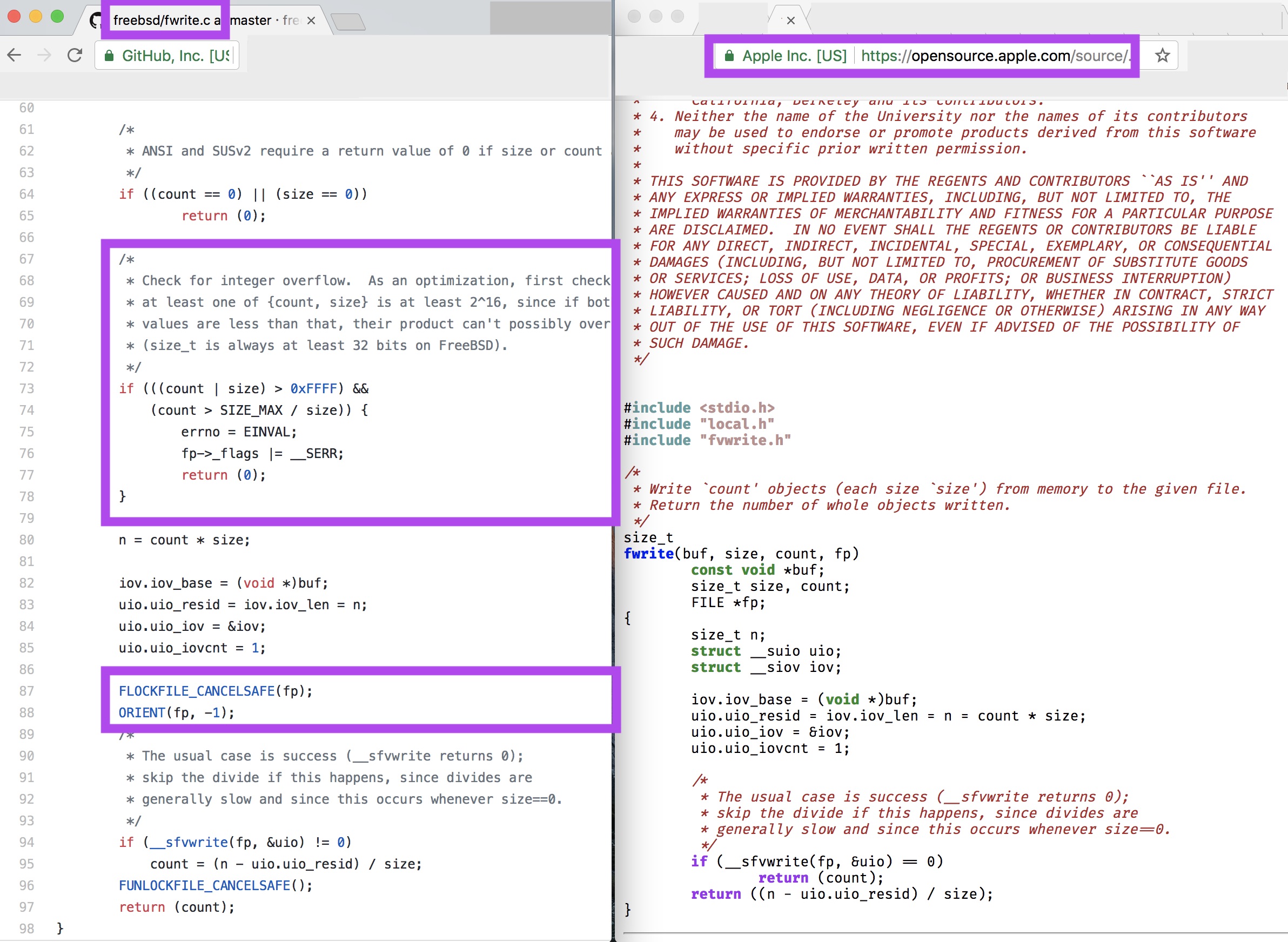 Thanks also to Dan Luu & Vaibhav Sagar for their feedback on a draft, and to Tobin Yehle for both proofreading a draft and figuring out I was looking at the wrong version of the makebuf.c file!