I spent the better part of the last month switching to typing in Colemak.

I switched as part of a broader ergonomics kick; I’ve been thinking about what habits I can change to be kinder to my body. Colemak is a keyboard layout that places the most commonly typed characters on the home row. The hypothesis is this is a more ergonomic user interface because you don’t need to move your fingers as much.

I use the moonlander keyboard, which is a split and ortholinear keyboard. Here is what Colemak looks like on my keyboard:

For reference, here is what the defacto layout, QWERTY, looks like. A major design consideration of Colemak was being easy to learn for people who know QWERTY. I drew the letters that are in the same position in both layouts in blue, and rest of the QWERTY layout in green:

This is actually my second attempt at learning Colemak. The first was almost exactly two years ago. I spent about a week learning where all the keys were with the help of learncolemak.com before giving up. I suspect that short experience made it easier to get started this time- Colemak is for quitters!

This is my experience report: a summary of what I did to learn Colemak and how long it took.

learncolemak.com is a fabulous html website that has 9 static typing tutors, each of which introduces a few letters at a time. I enjoyed it as a gentle introduction to the layout.

Epistory is a beautiful adventure game where you ride around on an origami fox, fighting big bugs by typing words that appear above them. I remember the miserable typing tutor game I was forced to play as a fifth grader. Epistory is the exact opposite of that- highly recommend! Epistory automatically adjusts the difficulty, and can start out easy enough that I could make progress when I could only type 14 wpm.

keybr.com is an excellent website that starts you out with a few letters and slowly adds one letter at a time as you master your letter set. It took me so long to earn my first additional letter that I wondered more than once if the website was broken. Nope, it just took me a lot of repetitive practice to solidly learn the home row. The feature of very slowly adding letters was very effective, especially for the letters that I found most challenging in Colemak. I found this site very zen- I had thought that typing gibberish sentences over and over would be boring but I found it to be a nice state of easy flow.

10fastfingers.com is a website that has a typing speed test on what it claims are the 200 most common words in English. It was okay. I didn’t love this site as much as the others but I think it was useful to practice typing common words and it was useful as a benchmark of my progress.

I also wrote a lot of text in Colemak; I switched cold-turkey so pretty much all the text I have written since switching has been in Colemak. One thing I practiced while writing text is when I typed a word wrong, I would delete the whole word (alt + backspace) and retype the whole word. If I typed it wrong again- and I often did, wrong in exactly the same way- I would delete that word and retype it until I did it correctly a few times in a row. Then I would delete all the extra words and continue with my writing. I didn’t measure whether or not this helped, but the hypothesis is that it let me train the correct muscle memory for typing that word.

I tracked the amount of time I spent learning Colemak using a drop-down tracker called daily. I didn’t set up daily specifically to know how long it took to learn Colemak; I use it to create a record of how I’m spending my time. I like doing this because it lets me see how I’m really spending my time, which lets me think about what I want to do with my time going forward. It’s a nice side-effect that I got to see how long it took to learn Colemak!

Below is a graph of how much time I spent in the last three weeks learning Colemak, split into two bars. The bottom bar (orange) shows the number of minutes each day I spent using one of the typing tutors I mentioned above. The top bar (yellow) shows the number of minutes I spent writing. This is a bit of an underestimate because I also wrote text while doing other activities, like sending emails, that I didn’t count here. 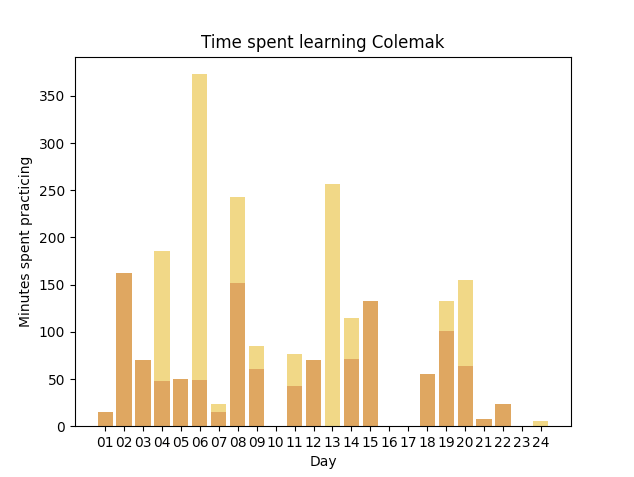 I spent a total of 24 hours (!) doing typing tutors, and an additional 17 hours writing. That is almost two full days!!

I started typing at a painful 12 wpm, and now am at around 50 wpm 24 days later. For reference, I typed about 75 wpm in QWERTY before I switched. Here is the full record of my average daily typing speed, as measured by 10fastfingers.com. 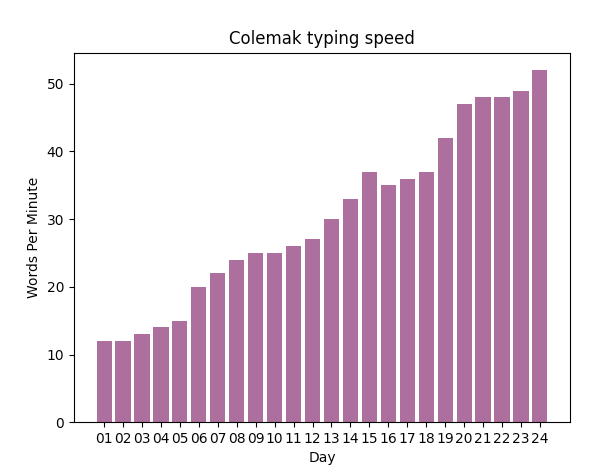 For the first five days, it took my full undivided attention to type at all. That was a bit frustrating but also… kind of fun? I don’t spend a lot of time being that terrible at something, or needing that much focus. My brain felt tired, but it was satisfying.

On day 6 I was at 24 wpm, and that was about when the mental load got lighter. I could begin to type some words like the without thinking about it. I managed to unlock my computer but not my password manager.

By day 17 I was consistently around 40 wpm, and that felt entirely tolerable. I typed notes on a video call without missing what was being said.

On day 20 I finished all the letters on keybr.com. It was a bittersweet victory. It was the moment I had been waiting for, but it also became less obvious what I should do next to get better. A few days later I am typing at about 50 wpm and it just feels like typing normally, even though I am still about 25 wpm slower than I had been in QWERTY. I think from here I slowly get faster through the quotidian process of typing in my day to day life.

I often felt like my progress on my wpm speed had stalled out, but looking at that graph, my progress was pretty linear. It was hard to see the slow progress in the moment, but clearly it compounded. If that’s not a parable, I don’t know what is.

Here are a few after-thoughts: